On Tuesday, Russian aircraft manufacturers displayed a prototype of a new fighter jet with stealth capabilities and other advanced technologies that would be sold to foreign purchasers.

Russian President Vladimir Putin viewed a potential warplane on show at the MAKS-2021 International Aviation and Space Salon in Zhukovsky, outside Moscow, which opened Tuesday. 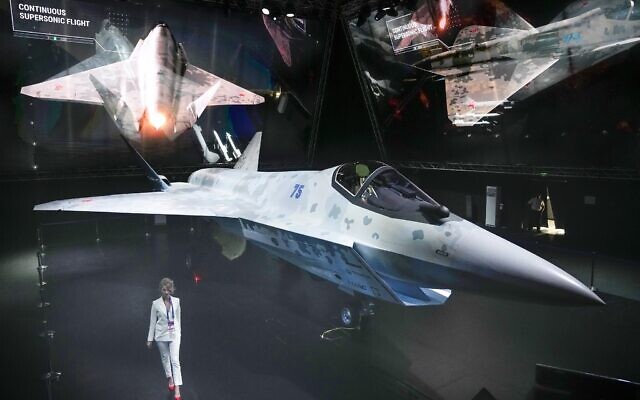 A prototype of Russia's prospective fighter jet is displayed at the MAKS-2021 International Aviation and Space Salon in Zhukovsky outside Zhukovsky, Russia, July 20, 2021. (AP/Alexander Zemlianichenko, Pool)

Sukhoi, a Russian aircraft manufacturer, produced the new fighter as part of the LTS program, which stands for Light Tactical Aircraft in Russian.

The prototype is expected to fly for the first time in 2023, with deliveries beginning in 2026, according to its creators. They claimed that the new design could be transformed into a two-seat variant and a non-piloted version.

The potential warplane, codenamed Checkmate, will have one engine and be smaller and less expensive than Russia's latest Su-57 two-engine stealth fighter, also made by Sukhoi. According to the jet's creators, it can travel at 1.8-2 times the speed of sound, has a range of 3,000 kilometers, and has a payload of 7,400 kilograms (16,300 pounds). 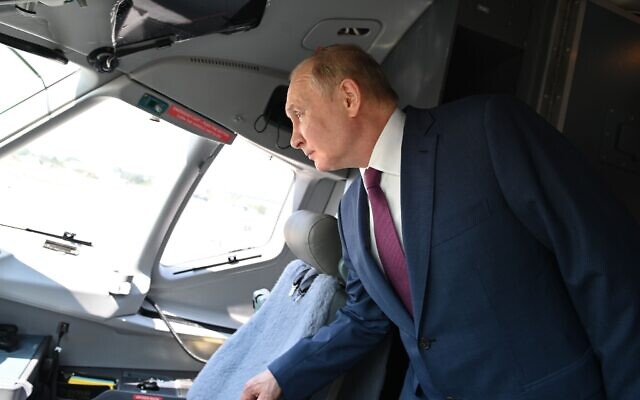 Deputy Prime Minister of Russia Yuri Borisov expressed optimism that the new fighter might be sold to India, Vietnam, and African countries, saying that international buyers are anticipated to order at least 300 of the planes. Borisov mentioned that one international buyer, whom he did not name, has shown great interest in the new jet.

The bulk of Russian arms exports have been warplanes, but the two-engine Su-30 and Su-35 fighters have faced increased competition in foreign markets.

Denis Manturov, the Minister of Industry and Trade, stated that the proposed aircraft will compete with the US F-35 Lightning II fighter, which entered service in 2015, as well as a new Chinese fighter and other designs. He stated, "We must join other nations that sell such aircraft."

The new jet is estimated to cost $25-30 million, according to Sergei Chemezov, the chairman of Rostec, which includes Sukhoi and other aircraft manufacturers. The Russian air force is also poised to put an order for the new fighter, according to him.

Since the 1980s, Russia's Sukhoi and MiG aircraft manufacturers have exclusively built two-engine fighters. According to some analysts, this has put Russia at a disadvantage in some overseas markets where customers prefer less expensive single-engine aircraft. 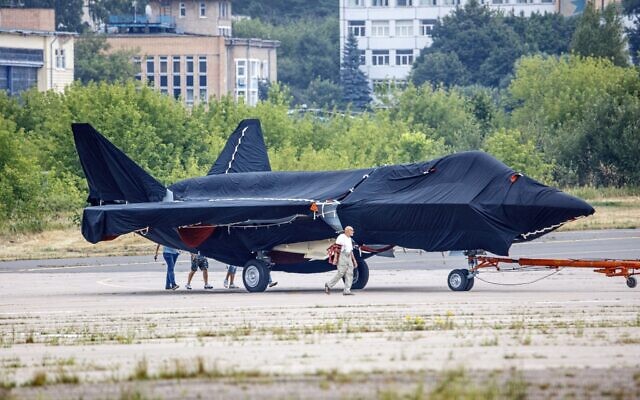 Hidden under tarpaulin, a prospective Russian fighter jet is being towed to a parking spot before its presentation at the Moscow international airshow in Zhukovsky outside Moscow, Russia, July 15, 2021. (AP Photo/Ivan Novikov-Dvinsky)

The new warplane, according to Rostec, is part of the so-called fifth generation of fighter jets, which includes stealth capabilities and the capacity to cruise at supersonic speeds, among other sophisticated features.

To help down costs, Manturov stated that the new design would combine some components from earlier fighters.

In the days leading up to the airshow, Rostec mounted an aggressive advertising campaign, sharing a photo of the new fighter covered beneath a black tarpaulin with the words “Wanna see me naked?” scrawled beneath it. It also produced a video adoring consumers from India, the United Arab Emirates, Argentina, Vietnam, and other countries, indicating that it aims to expand its export market.

Last week, plane spotters went to Zhukovsky to photograph the new plane as it was taxied to a parking location across the massive airfield, which has functioned as the country's primary military aviation test center since the Cold War.

Despite tensions with the West following Moscow's 2014 annexation of Ukraine's Crimean Peninsula, the Kremlin has made upgrading of the country's arsenals a top priority.

It has also pushed for the construction of new passenger jets to compete with the Boeing and Airbus planes that now make up the majority of Russian airlines' fleets.

Western sanctions have delayed the supply of Western engines and other essential components, causing delays in Russia's airliner plans. However, the country was able to develop a new engine for the new MS-21 passenger airliner, which was also on display during the Zhukovsky expo.

In a speech at the show's opening, Putin remarked, "What we saw in Zhukovsky today demonstrates that Russian aviation has a large potential for development, and our aircraft manufacturing industries continue to create new competitive aircraft designs."