According to paleontologists, a massive dinosaur discovered in Australia's outback has been identified as a new species and recognized as one of the world's largest dinosaurs.

After 15 years, the Australotitan cooperensis, a titanosaur that lived about 100 million years ago, has been identified and characterized. 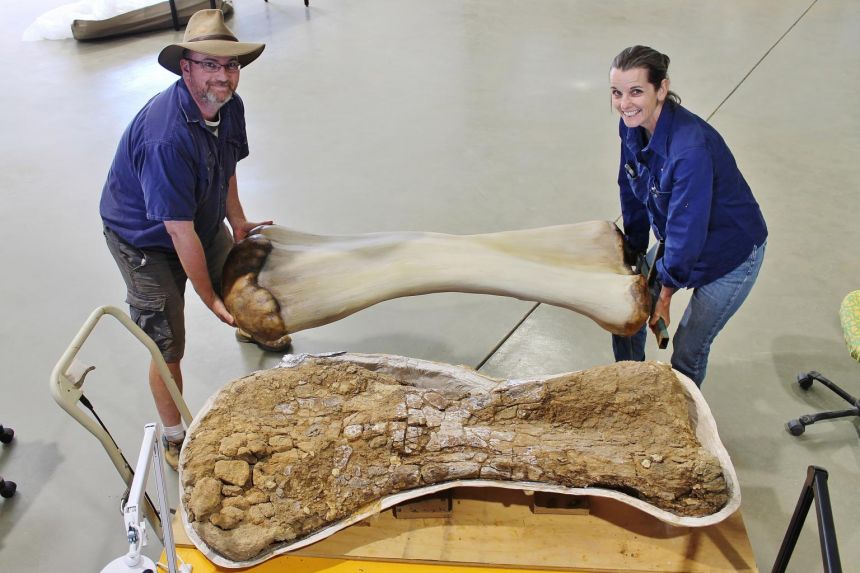 Dr. Scott Hocknull and Dr. Robyn Mackenzie with a 3D reconstruction of the humerus of Australotitan cooperensis.PHOTO: NYTIMES

It was estimated to have stood 5 to 6.5 meters tall and measured 25 to 30 meters in length, making it Australia's largest dinosaur.

"Based on preserved limb size comparisons, this new titanosaur is projected to be among the top five largest in the world," stated Eromanga Natural History Museum director Dr. Robyn Mackenzie.

The fossilized bones, called "Cooper," were discovered on Dr. Mackenzie's family farm in the Eromanga Basin, roughly 1,000 kilometers west of Brisbane, in 2006.

The skeleton was initially on exhibit to the public in 2007, after experts meticulously dug out and analyzed the bones.

Dr. Scott Hocknull, a paleontologist at the Queensland Museum, said confirming the Australotitan was a new species had been a "very hard and painful effort."

The study, which compared the dinosaur to its close relatives using 3D scan models of bones, was published in the peer-reviewed PeerJ journal on Monday (June 7).

Dr. Hocknull noted that numerous other dinosaur skeletons have been discovered in the same location, but that further research is needed since "discoveries like this are merely the tip of the iceberg."

Foo Fighters to perform in Los Angeles for vaccinated people

Delta Covid variant detected in Victoria amid the extension of lockdown

Daughter-in-law of Donald Trump, Lara Trump urges Southern Americans to "Arm up and get guns"

Eriksen "stable and awake" after collapsing in a Eurocup match