IN PICTURES: Kim Kardashian shows off her most valuable asset in an Instagram post after achieving billionaire status

Kim Kardashian flaunted her wealth in a celebratory Instagram post after Forbes declared her a billionaire on Tuesday.

The 40-year-old business mogul posed in a revealing bikini in new photos and declared a moment of 'bliss' on Instagram.

Kim is now ranked 2674th on the Forbes Billionaires list, trailing in the footsteps of her baby sister Kylie and estranged husband Kanye. 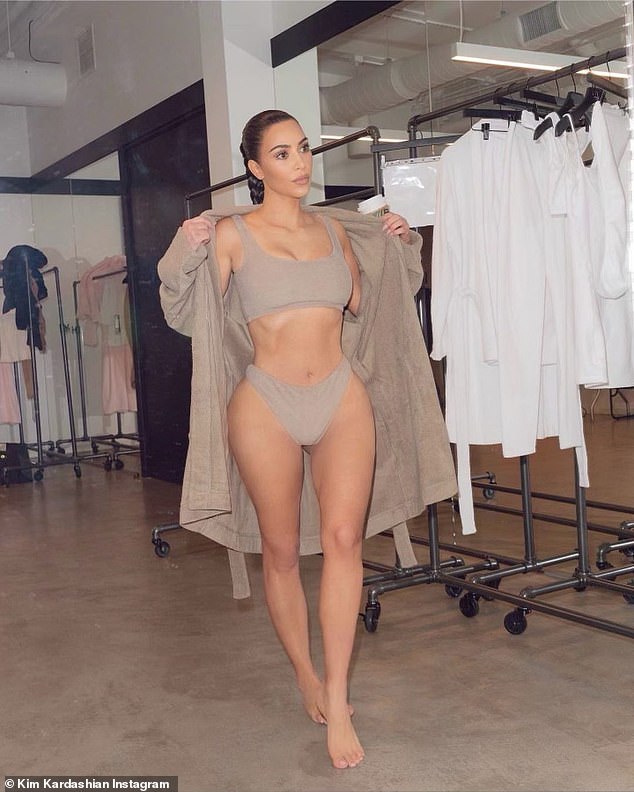 Kim put it succinctly in an Instagram caption: 'Bliss.'

In two beach photos, the entrepreneur flashed her megawatt grin, tossing her head back in laughter in the second.

Kim knelt in the sand at the edge of the ocean, her money-making curves on full display in a putty-toned bikini that perched high on her rounded hips.

Palm trees and a resort could be seen in the background of the shot. The Kardashian Jenners have gone on a seemingly never-ending series of weekend getaways and full-fledged luxury vacations during the pandemic.

Putting aside her dubious decision to fly regularly during COVID-19, Kim has more than enough money to keep taking her loved ones on vacations.

According to Forbes, her net worth has risen from $780 million to $1 billion since October, when she was formally added to the billionaire's list. 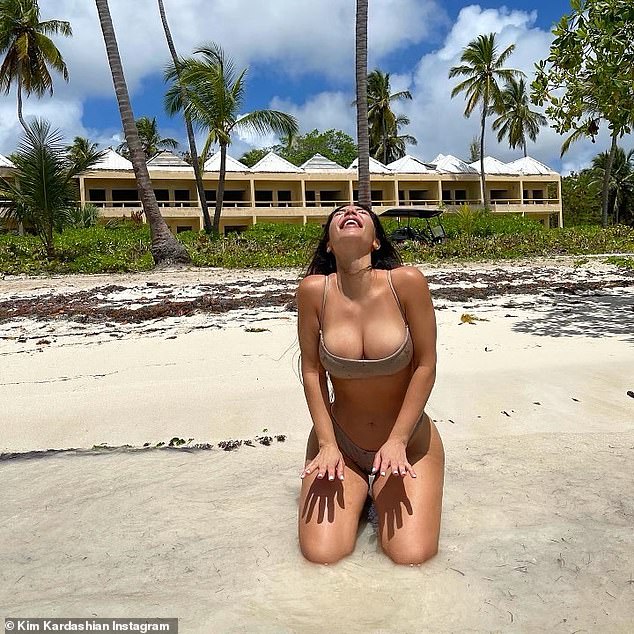 Kanye West, who is ahead of Kim in the 1750th position with a net worth of $1.8 billion, is also on the list. Since selling a 51 percent stake in her business in 2020, Kylie Jenner is no longer on the list.

Kim's net worth has risen to $1 billion since she expanded her business empire with her shapewear line Skims over the last few years.

She owns a $225 million stake in Skims and sold a 20% stake in KKW Beauty to Coty in January of last year for $200 million while keeping a 72 percent stake in the business worth $500 million.

Keeping Up with the Kardashians (now in its final season), marketing ads, social media updates, and her game app, Kim Kardashian: Hollywood, all bring in at least $10 million a year for the reality TV star.

She also has a sizable stock portfolio, which includes Amazon and Disney stock. In 2017, Kanye gave her the portfolio as a Christmas present. It was worth $100,000 at the time.

Kylie Jenner, her 23-year-old niece, made history in 2019 by becoming the world's youngest self-made billionaire at the age of 21.

Her riches came from her own make-up line, Kylie Cosmetics, which she marketed solely via social media.

After pleading with Forbes for months to look into his finances, Kanye West was declared a billionaire in April. Forbes is largely the most reliable media expert on who gets the tag.

He said that because of his race, they had snubbed him for years, leaving him off the annual April list.

He backed up his claim with financial documents from his hugely popular sneaker and clothing brand, Yeezy.

Kim has plans to grow her business empire by launching a skincare line, following in the footsteps of Kylie Jenner.

The E! star recently applied for a trademark for her new company, 'SKKN BY KIM,' with the United States Patent and Trademark Office.

Kim is reportedly planning to launch a line of skincare items for skin, hair, nails, fragrances, and cosmetics, according to TMZ.

First look at the set photos of live-action Powerpuff Girls

Beloved Zookeeper Jack Hanna steppping out because of Dementia

IN PICTURES: Kim Kardashian shows off her most valuable asset in an Instagram post after achieving billionaire status