Veteran cyclist Devendra Basnyat is cycling a distance of 1,200 km from Dolakha to Dipayal under the slogan 'Pedal for education' for the first time in Nepal for a social cause.

The information about the cycle trip campaign came through a press conference on Tuesday in Kathmandu. 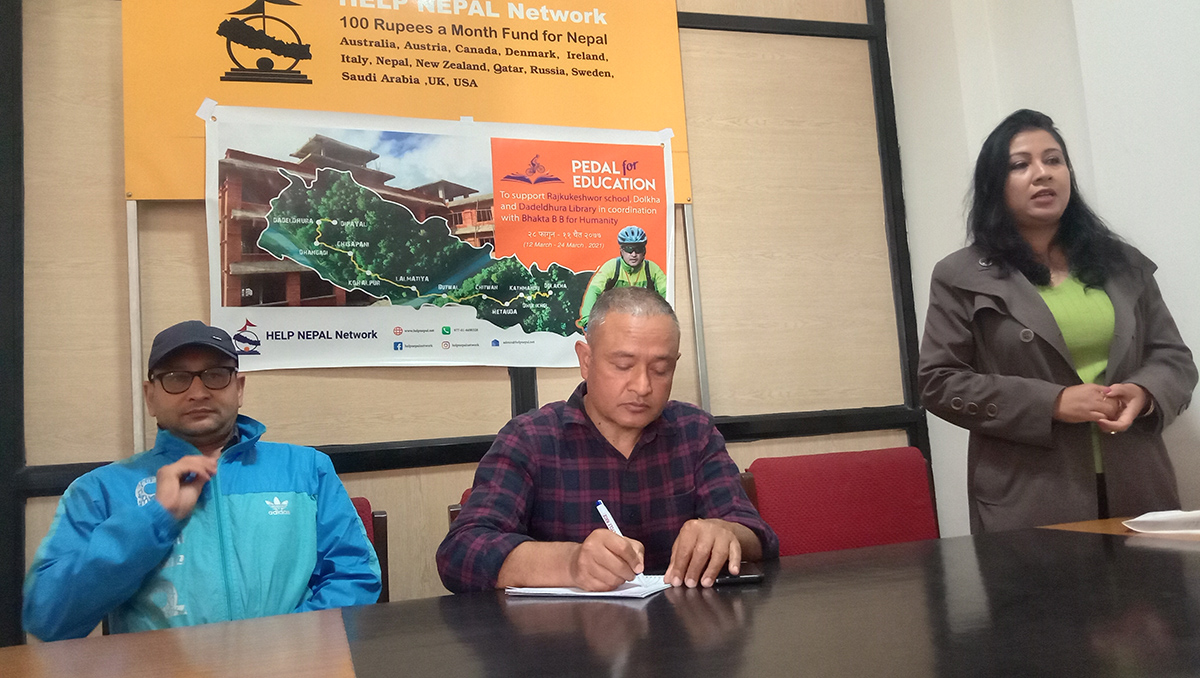 The main purpose of the trip is to raise funds for the construction of a school building under construction in Dolakha and a library in Dadeldhura. Speaking at a press conference organized by "Help Nepal Network", Lata Ghimire, secretary and health coordinator of the network said that the organization was working in the field of education and providing health emergency assistance during a disaster in Nepal. She informed that the fund raised from the cycling campaign will be spent on the construction of the school building at Dolakha and the library to be established at Dadeldhura.

Cyclist Devendra Basnyat has been involved in successfully organizing various campaigns during his cycling journey for over a decade. In a press meet, Basnyat said, "This is the first time in Nepal to raise funds for education by cycling."

"Even though such campaigns are commonly carried out abroad, it is being organized for the first time in Nepal." He added, "It is a golden opportunity and I am happy to be associated with such an event."

He has planned to celebrate the golden jubilee's birthday through cycling for the social cause. Basnyat said that the campaign is 'one rupee per kilometer', any interested individuals, groups and organizations can donate through the mobile app 'Khalti' and click on 'Pedal for Education'.

Similarly, donations can be deposited in Help Nepal Network Bank official Bank account number 001010010000791 of Sanima Bank. He is supporting the campaign for free and would bear the cost of repairing the bicycle himself. Basnyat has been involved in various bicycle campaigns since 2008, with world cyclist Pushkar Shah in different competitions, tourism promotion-related events across the country.

Culture expert Satya Mohan Joshi and advisor to the organization and former finance minister, and writer Shankar Koirala, Vijay Rajbhandari will be bidding farewell to Basnyat at Kathmandu on March 12.

Help Nepal network is a social organization started two decades ago with the 'One Dollar a Month' campaign. The organization has so far constructed more than 50 school buildings and several libraries and e-libraries across the country, said Chairman Arun Singh Basnyat. The Rajkuleshwor school building constructed by HELP Nepal Network is being rebuilt after it was damaged after the 2015 earthquake.

The estimated cost is Rs 60 million, of which Rs 37 million has been spent so far, said Chairman Basnyat. The organization is working in the social sector for education and health in remote and rural areas of Nepal. Basnyat will cycle through Dolakha, Dhulikhel, Kathmandu, Hetauda, Chitwan, Butwal, Lalmatiya, Kohalpur, Chisapani, Dhanagadi, Dadeldhura, and Dipayal covering a distance of 1200 km.