Myanmar Anti-Coup Protests: a woman who was shot passes away

BreaknLinks
Yangon
Demonstrators protest against the military coup in Yangon| Myanmar| via: Reuters

Mya Thwate Thwate Khaing, a 20-year-old woman, who was shot in the head during the Myanmar anti-coup protest has passed away.

She was shot last week as the police fired bullets at the protestors to disperse the crowd. This is the first death among the anti-coup protestors opposing the coup in Myanmar by the Military on February 1.

She was rushed to the hospital on Feb 9 after being hit by a live bullet at a protest in the Myanmar capital Naypyidaw.

Her brother, Ye Htut Aung, said he is feeling very sad and has nothing to say.

Reuters quoted him saying, “I’m proud of her and I’ll come out until we achieve our goal for her. I’m not worried about my safety,” at a rally in Yangon. 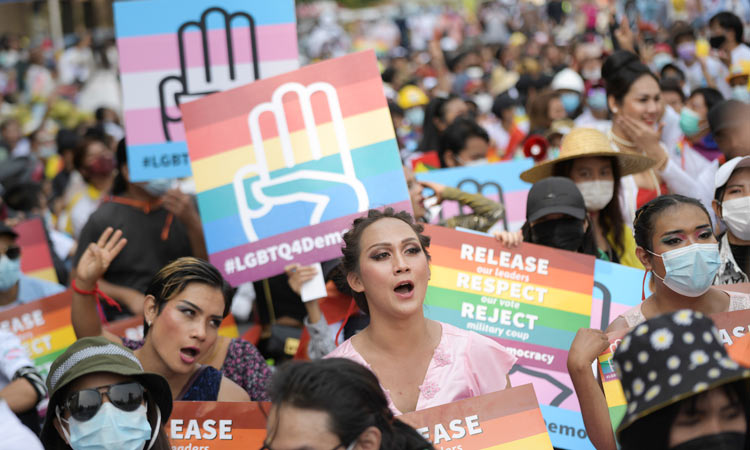 Members of the LGBTQ community protest against the military coup in Yangon, Myanmar. Reuters

The protests continue in Myanmar in the cities throughout the ethnically diverse country.

The government business has been paralyzed through civil disobedience and international sanctions.

Myanmar got back its democracy in 2011 after being bloodily suppressed under 50 years of military rule.

Police have been firing rubber bullets and catapults to disperse the crowd. But the young people continue to gather to protest against the tyranny in the country.

Britain, the USA, and Canada have announced sanctions in the country. Burmese people outside of Myanmar also have been protesting against the coup throughout the world.

At least 15 killed in recent prison violence in Ecuador